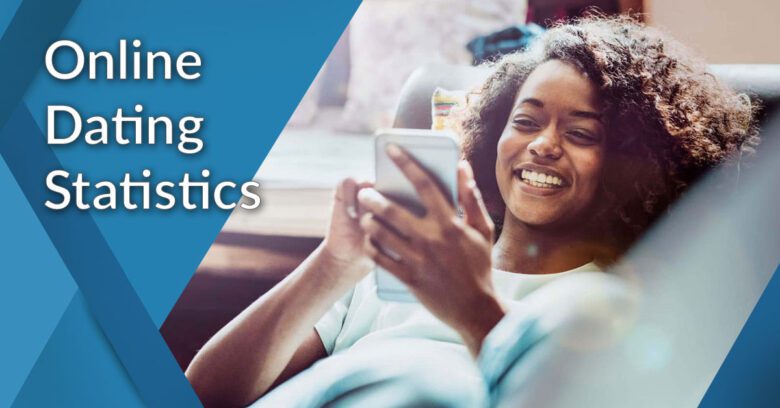 For those of us working on finding love online, looking at online dating statistics can provide great insight into the current state of the dating app industry. With another year in the books, it is a perfect time to delve into online dating industry statistics to get a sense of how the year that was 2021 went on the dating apps market.

If it seems like everyone single person you know is on a dating app, there’s probably a good reason for it. The number of people using dating apps has continued to grow over time. Online dating statistics show that 30.4 million people used online dating apps in the U.S. last year, a number projected to increase by 16.4% over the next six years.

The majority of people utilize their smartphones for online dating, with 25.1 million of the 30.4 million using dating apps rather than conventional websites in their pursuit of love. In total, roughly one out of every three adults in the United States has used a dating site or app at one point during their lives.

When it comes to the dating apps themselves, Tinder continues to be king of the dating industry, with twice as many downloads as its closest competitor, Bumble. Coming in third in terms of popularity is Hinge. Match Group owns the first (Tinder), third (Hinge), fifth (Match), and sixth (OKCupid) most frequently downloaded dating apps on the market.

Growth in the online dating industry can also be evidenced by an increase in revenue generated from the products. Global revenue grew from $3.08 billion in 2020 to a projected $3.33 billion in 2021, an increase of over 8%. Revenue is projected to increase to over $5 billion by the end of 2024, showing that the popularity of the dating apps market is expected to continue to increase.

While online dating statistics show a strong increase in use and revenue, getting a complete picture of the dating industry also requires understanding the demographics of who the users of these products are. In terms of gender, 32% of American women and 23% of American men have used dating apps at least once in their lives with women comprising 60% of users in 2021.

Meanwhile, 55% of LGBT adults have used a dating app at one point in their lives. Of all LGBT adults currently looking for dates, 37% are currently on a dating site or app. Thus, it is not surprising that LGBT singles were more likely than straight singles to meet a long-term partner online, 21% compared to 11%.

The average age of online dating users in 2021 was 33.8, although women in their 20s represented the group who received the most messages. In fact, the largest demographic age group for online dating apps was people aged 18-29, comprising 36% of online daters.

There are significant differences in income for dating app users. Statistics on internet dating for 2021 showed that 28% of users earned over $75,000 per year while 34% made less than $30,000 per year. This shows that there are two fairly large groups at different ends of the socio-economic spectrum who are swiping online.

Another interesting way to assess the current online dating app industry is through the values and beliefs of people currently swiping. A number of surveys have looked at the views possessed by current daters which provide great insight into the dating app market.

While 70% of app users in the dating industry believe that lying on dating apps is common, 57% of users reported having a generally positive experience with online dating. The most common concerns reported regarding using dating apps were people being deceptive about their appearance and people trying to scam others.

When it comes to who foots the bill, roughly two-thirds of dating app users believe men should pay for the first date. Surprisingly, this stat about online dating is driven by men as 80% of men held that belief compared to only 55% of women. The average cost of a date was $116, although this ranged significantly from area to area.

Online Dating Statistics in the Pandemic

The dating market definitely saw some changes due to the COVID-19 pandemic. In fact, statistics on online dating who how the pandemic continued to affect people’s dating decisions in 2021. These trends include a number of changes to traditional dating practices.

Face masks were an important consideration for many daters. In fact, 20% of daters insisted that both parties wore a mask during first dates with Gen Z and millennials more likely to support this practice. Additionally, 36% of people agreed that the pandemic made them more selective of who they date while 23% said it made them more selective of where they go on dates.

The other major change that the pandemic brought to the online dating industry was the rise of video dating. While video dating was a very popular thing at the height of restrictions in 2020, many users continue to view it as a good option for meeting people with 52% of dating app users saying they plan to continue video dates post-pandemic.