By Dating Detective on Thursday, February 10, 2022 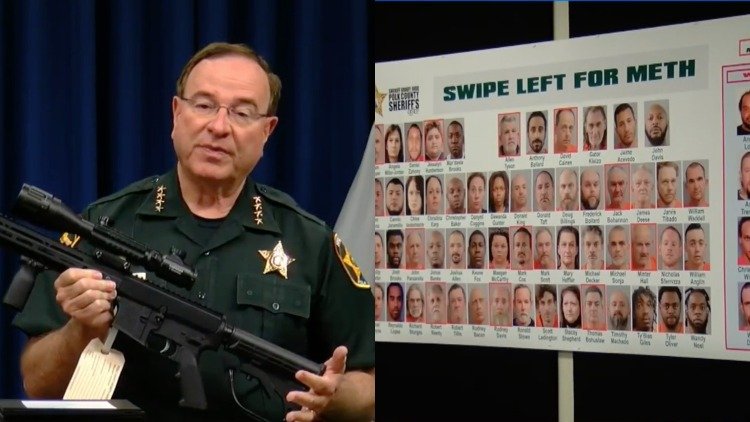 Criminals have always looked for novel ways to earn money while law enforcement works to pivot their investigations in order to catch up with new tactics. An excellent example of this recently occurred in Polk County Florida where Sheriff Grady Judd disclosed that his department had utilized LGBTQ dating apps such as Taimi, Grindr, and Scruff to seek out and arrest drug dealers.

Sheriff Grady Judd announced that this sting operation, entitled “Swipe Left for Meth,” sought to identify drug dealers who were using dating apps to sell drugs. It was announced that dealers would use code words in dating profiles to let potential clients know what they were selling. Code words including phrases like “ice cream,” “party,” and the letter “T.”

This sting operation targeted drug dealers using LGBTQ dating apps such as Taimi, Grindr, and Scruff. Officers would match with a potential drug dealer and initiate a conversation. They reported that while they were not invited to any dates, they were offered to buy drugs quite frequently. After making the purchases, the suspects were then arrested.

In total, Sheriff Grady Judd noted that 60 arrests were made in the gay app drug bust in Florida. This included the seizure of over $14,000 worth of methamphetamine, several grams of cocaine as well as other substances including marijuana, fentanyl, psychedelic mushrooms, and ecstasy. The undercover operation also resulted in the seizure of several weapons including two stolen firearms.

During the press conference, Sheriff Grady Judd noted that drug dealers were getting more creative in their tactics to sell drugs. Investigations found that dealers were utilized the gay apps to organize drug deals, leading to the creation of this sting operation.

In an era where there are widespread security issues amongst dating apps and many complaints regarding safety, the news that apps are being utilized to sell drugs adds yet another element of concern to the dating app industry. The results of the investigations as detailed by Sheriff Grady Judd revealed that users can easily access virtually any substance simply by being familiar with code words used online to market illegal drugs.

It is important to note that each of the LGBTQ apps utilized in this investigation has policies that prohibit the sale of illegal items including drugs. Despite this, investigators were able to readily find drugs in a short time. This suggests that efforts at preventing users from using these apps to sell drugs are either nonexistent or unsuccessful.

When questioned by media, representatives from the Taimi dating app noted that they have algorithms in place that actively search for individuals who are violating the terms of service, allowing them to ban them from the app; however, they noted that the algorithms are not perfect. Other companies that received requests for a response did not comment. The Taimi gay app seems to note that there is a problem; however, their response did not commit to any further action aimed at addressing this issue.

During a time when drug abuse is a national crisis, the fact that it is easy to find drugs online through something as simple as swiping around a dating app should definitely concern society. In the wake of Sheriff Grady Judd’s press conference, one question people should be asking is whether dating apps will aim to address this problem.

After all, mobile apps already take efforts to identify and ban users for all sorts of things including scamming people or acting inappropriately. It should be rather easy for an app to significantly reduce the presence of drugs online with a little innovation. It is known that drug dealers use code words to let potential buyers know that they are wanting to sell drugs. It should be rather easy to create an algorithm that scans for these types of words and flags profiles for review.

Additionally, programmers for LGBTQ dating apps like the Taimi gay app could also write code that monitors chat conversations for phrases that indicate a user is attempting to arrange a drug deal. While privacy advocates would likely cry foul at this, it could be the most effective way to proactively identify and remove those who sell drugs from these apps.

With this story being relatively new, it remains to be seen if there will be significant public blowback against the dating app companies. If this results in a situation of poor publicity, it may force the hand of these mobile apps and push them to action. Creating a space for people to interact means taking reasonable steps to prevent the facilitation of illegal activity. Will dating apps step up in trying to prevent buying drugs online on their mobile apps? Only time will tell.